Small but mighty right at the Snowflake chair, a newer studio that lives far more like a small one bedroom, and even has 1.5 baths. The small kitchen separates the living room from the bedroom, and your view is the woods and watching the lift go by.

This unit is one you can use to escape with a hotter summer, and hike to one of the best in town hikes right next to your front door, to a hidden lake, waterfalls, log bridges and teaming with wildflowers. In the winter right out the door and onto the lift, and ski right back to the front door. Walk to town or catch the Wyndham shuttle. Relax in the hot tub, or have a party in the the lovely main lounge. Who needs the car you have parked underneath the building.  $299,000. Wow. You can have it all.

I have been busy learning how to shoot videos, but so far I have not taken one I am proud of…so I stopped posting. But too much happening to miss all that is happening. Let’s start with the last first. I got the sweetest letter that said a new listing from an old customer. he then went on to detail about how hard I worked to get them what they wanted, and now their family is grown, moved to California, and he is buying in Tahoe. Unlike most sellers, he is not wanting to squeeze out every last penny. he asked me to  list it so it would sell in a reasonable time. So this 2 bedroom, 2 bath unit, with the best view in the county, is listed at $649,000. He put in a wonderful new kitchen, granite vanities in the baths, and  a view that really needs a panoramic camera to capture. It has the Blue River (we could see a fly fisherman), dumping into the Maggie Pond. We see the entire Pond, the waterfall cascading back into the Blue River.We saw Mount Baldy, Red Mountain, east to Main Street Station , the new Waterhouse under construction, the ski area, the lift, and both Peak 8 & 9  and all the runs on both mountains, even Peak 10 in the distance.  A balcony that seats 6 plus a gas grill, if your not prone to a fear of heights. I think this is one of the best listings in town, and it will sell very soon.

enter fullscreenview all (25)
by Brandy Zadrozny

A lot has changed in the 44 years since the first Earth Day, when 20 million people rallied across the country to bring awareness to environmental issues such as oil spills, pollution, and the extinction of wildlife. Now Earth Day advocates have added climate change to their campaign.

As more than half of the world’s population lives in cities, it’s the environmental initiatives 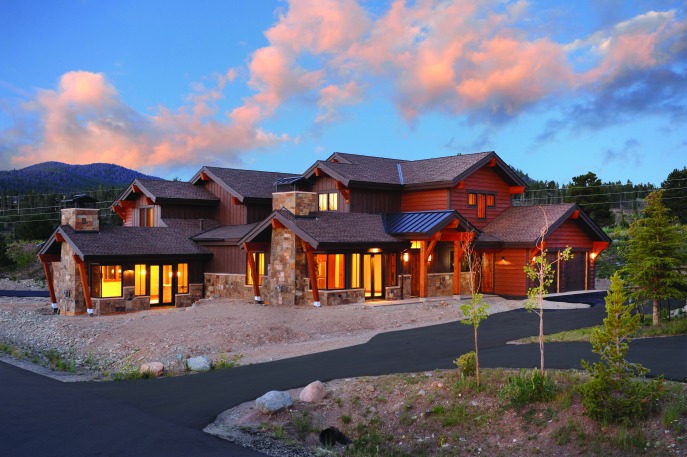 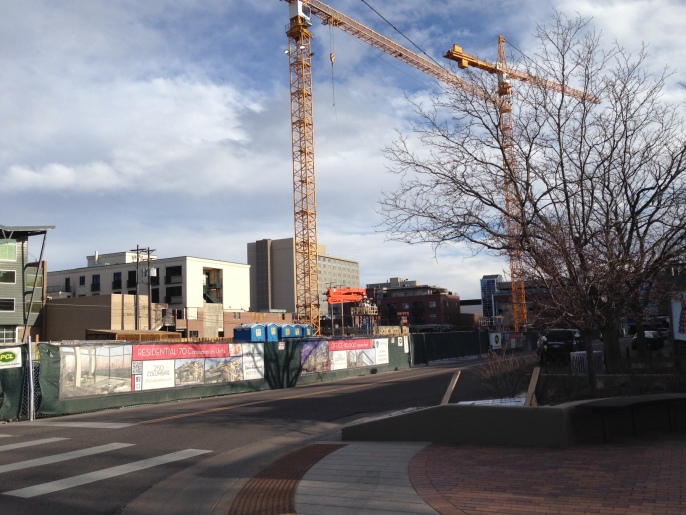 We have had a house in Denver for about 14 years. Never before have I seen so much construction happening at one time. It’s absurd in Cherry Creek North, which is where I live, but drive along 1-25 through the core of downtown to the east, and the Highlands on the west, and cranes, and framed buildings is all you can see. I used to joke ( back in about 2006) that here in Breckenridge, that if you dug a hole, it rained and a house grew. Now in Denver the holes are bigger condo complex’s, commercial, and many, many apartments. Here in Summit County, we don’t have the place for much more than single family homesites ( 260 currently on the market). After 35 years I can speak from experience, if you want new, and you want condo, you have one, maybe 2 years at the most. If you want to build a home, or buy a spec, you have maybe 5-10 years, but, this sleepy little county I moved to 35 years ago, will soon be closing it’s doors to homeowners, as the visitors climb to maximum occupancy. 2013 was the best year ever, and wait till the numbers come in on 2014. The numbers will be through the roof.

way up high, on Rounds Rd in the Highlands, this 4 bedroom 5.5 baths plus loft, plus office, plus breakfast room, 2 bars ( 1 on each entertaining floor), a wine room, mud room, laundry/craft room, 3 car garage with lots of storage….on 3 plus acres, great views of the ski area….just 1 mile from the rec center….this Jon Gunson creation. The winners a nice couple from Wichita, KS, will won this early May. 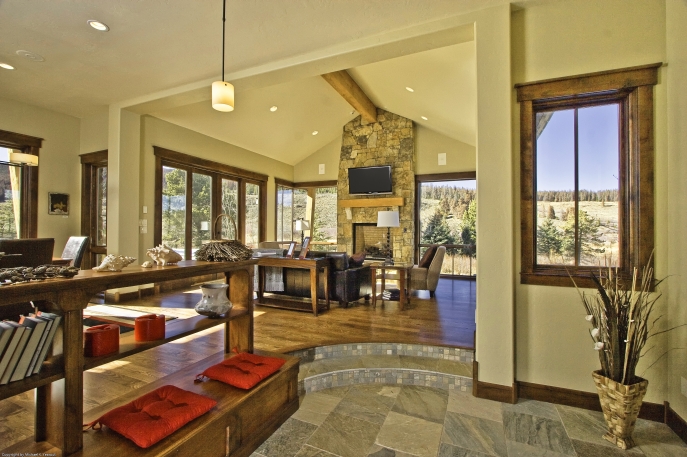 If I had the option I’d be living here. I love the quality, the main floor bedroom and the expansive views. For under a million dollars, write one of these up, choose your customizations and sit back and wait for your nearly perfect home to be built. Remember, new projects are about to stop. Get in now for the really great buys

Slifer, Smith & Frampton Real Estate is offering high quality, mountain contemporary new homes mostly three, but with a few 4 bedroom options, starting at $895,000 ( about a 40% reduction now that they are no longer under the Fairmont name.) Main floor masters wide open floor plans make these a best in this price range. Living to the North of Breckenridge, means in busy seasons you can head to Frisco, Silverthorne or Denver without getting into the traffic. If you are in this price range, call me, you need to see them.

I have been talking about the last few complex’s going to be built in Breckenridge, and here is the next one to start this spring or early summer…Maggie Point. 18 townhomes, 9, closest to street are employee hosing, with the restriction of having to work for the town or county for more than  20 hours a week, They will be priced lower, but there is a cap on  yearly appreciation. The other buildings, mostly duplexes, with big views of the ski area. They are each 3 bedroom 3. 3/4 baths and 1/2 bath. Each has a 1 car garage. They will start at $695,000, and to reserve one you’ll first need $15,000 earnest money deposit,and 30 days later you’ll need to put another 10% down. the balance will be do when complete, either late 2014 or early 2015. Only 3 units have thus far been released for sale.

Being built by the same builder doing Angler Mountain Ranch in Silverthorne, they will be very quality built and a fine home built for 2015.

I live just around the corner at River Park townhomes, and I have come to love the area. The shuttle to skiing or town stops just up by Highway 9, but it’s and easy walk to town, either down the sidewalk, or down a lovely treed path along the river. I’m in town by car in 3 minutes, yet I am not living in the hustle bustle of Breckenridge.

During our 35 years here, we have lived in 12 homes from Spruce Valley Ranch ( 16 of 35 years in 3 homes) to up on the peak 8 ski area (13 years)…so I know good neighborhoods,and have been very spoiled.

I expect thee units will sell out long before they are built.

The Wall Street Journal thinks perhaps you need to diversify out of the stock market again. Lessons from a Bull Market!

Lessons from the Bull Market
Do you remember how you felt about the stock market on March 9, 2009?
Evidence suggests many investors have blocked out those fearful times. Five years after the S&P
500 hit its lowest point during the financial crisis, investors are pouring money into stocks.
In 2013, investors put $172 billion into U.S. stock mutual funds and exchange-traded funds, more
than they had withdrawn from 2008 to 2012 combined, according to Lipper, which tracks funds.
They have added another $24 billion in 2014, through March 5th.
A little complacency is understandable. If you took a Rip Van Winkle nap in 2007 and woke up this
weekend, you might conclude nothing bad had happened. The S&P 500 has shot up to record
levels and hit another all-time peak on Friday. The index is up 178% over the past five years, not
including dividends.
But the financial crisis was real and so was the steep plunge it triggered in the stock market. Instead
of sweeping those memories aside, investors need to reflect honestly about what that bear market
meant, how it affected their behavior then and how it ought to factor into their thinking now.
Above all, investors should prepare for the future with a few strategies whose enduring value has
been underscored by the events of the past five years.
Be Skeptical of Experts:
Take expert predictions lightly and if you act on them, make small moves
rather than drastic ones.
Remember What Losing Felt Like:
In a speech about intellectual honesty 40 years ago, Nobel
Prize-winning physicist Richard Feynman said, “The first principle is that you must not fool yourself —
and you are the easiest person to fool.”
Limit Risk-Taking:
Owning some stock is a good thing for many investors. Instead of periodically
bailing on stocks, investors would be better off keeping a smaller amount in stocks and sticking with
that allocation in good times and bad. Alternatively, investors can pare back their stock allocation
if they’re willing to step up their savings rate to compensate.
Be Wary of Labels:
Terms like bull market and bear market are eye-catching labels — not forecasts.
Question Performance Figures:
Past performance doesn’t guarantee future results. In fact, it can
be a poor guide to past results, too.
(Source: Wall Street Journal, 3/7/2014)
The Breckenridge News
Blog at WordPress.com.