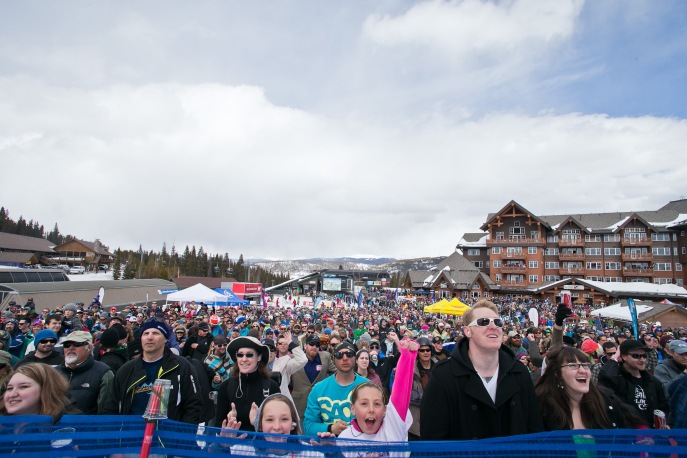 The Bud Light Concert Series features four concert days of big-name acts on Friday, Saturday and Sunday afternoons over the next two weekends. All concerts will be FREE to the public and will take place on a specially-constructed stage facing One Ski Hill Place, a RockResort, at the base of Peak 8, starting at 2 p.m. on each concert date.

The full line-up of this week’s Spring Fever events is as follows:

Friday, April 11
The Third 5’ til 5’ Terrain Park Happy Hour
Head to the park every Friday afternoon during Spring Fever from 2 p.m.-5 p.m., where the 5 Chair will run late until 5 p.m.! This means extra access to some great spring park laps- plus music and free hot dogs! Skiers and riders can compete in jam style contest where competitors can win season passes, GoPros and other great prizes. Test out your skills and get ready for some fun in the sun!

Saturday, April 12
Big Bad Voodoo Daddy – Known for such hits as “Go Daddy-O,” “You & Me & the Bottle Makes 3 Tonight (Baby),” and “Mr. Pinstripe Suit,” and their appearance at the Super Bowl XXXIII halftime show in 1999, Big Bad Voodoo Daddy remind the world that it’s still cool to swing, big band style. Their high-energy nine-piece ensemble continues the party and urges their millions of fans worldwide to shake and move to their inimitable grooves while also expanding their horizons with new musical inspiration and influence.

Imperial Challenge
The 2014 Imperial Challenge…the most unique pseudo-triathlon anywhere returns to Breck this weekend. RUN or RIDE your bike six miles from the Breckenridge Recreaction Center to the base of Peak 8 at the Breckenridge Ski Resort. ASCEND on your choice of gear to either the top of the T Bar (Sport Course 2500’) or to the tippy top of Peak 8 (Expert Course 3000’). DESCEND to the base of Peak 8 and the finish! Visit http://www.mavsports.comfor registration and details.

Sunday, April 13
The Gin Blossoms–The Grammy-nominated group, with their blend of Pop & Rock, became a musical force that helped define the sound of 90’s radio. With massive hits like “Follow You Down,” “Til I Hear It From You,” and “Hey Jealousy,” they took the airwaves by siege and held MTV hostage with multi cross-over hits in four different radio formats. After a series of charting singles, the band broke up in 1997. They reunited in 2002 and released a fourth album, Major Lodge Victory, in 2006, and a fifth, No Chocolate Cake, in 2010.

Concerts coming up next weekend…

Friday, April 18
Yonder Mountain String Band– This Colorado native foursome has always played music by their own set of rules. Blending bluegrass, rock and countless other influences that the band cites, Yonder has pioneered a sound of their own. With their traditional lineup of instruments, the band may look like a traditional bluegrass band at first glance, but they’ve created their own music that transcends any genre, as evidenced by their legions of loyal fans from the Centennial State and beyond.

Saturday, April 19
Blues Traveler– One of the world’s legendary jam bands, Blues Traveler have released a total of nine studio albums, four of which have gone gold, three platinum, and one six-times platinum. Over the course of their illustrious career, Blues Traveler have sold more than 10 million combined units worldwide, played over 2,000 live shows in front of more than 30 million people, and with their hit song “Run-Around” had the longest-charting radio single in Billboard history, which earned them a Grammy®.

In my 35 years here it was a big one, very much like this photo I found online. I was not leaving the window in search of my camera, when I could stand there and just watch that magnificent creature meandering up the street, and into a house under construction.

In the heart of Cherry Creek North, Co. our 2 bedroom home is our getaway from winters that last too long or start too early. We have owned in Denver for about 15 years, and it sure has helped us live 35 wonderful years in Breckenridge. But we can’t justify having a house that we use 40 days a year, so we have been very fortunate to have VRBO help us screen some wonderful guests who are delighted to use it, respect it, and enjoy it to come back time and time again.

A funny story not many know about VRBO, but it was started by a couple who bought a house in the Highlands, and just couldn’t support it with a local management companies, so they started a website. What I don’t know is if they kept the house after Home Away paid them $120,000,000.

There should be more music like this in the world, and I love the video! If you have not seen it I hope I have the correct link.If not search youtube for it. It’s so worth it , I made it my new ring tone.